There were 6 teams in the First Grade Competition, Acton, Ainslie, Eastlake, Queanbeyan and RMC.

With 3 rounds to go in the home and away Ainslie were outside the top four. They defeated Queanbeyan, Acton and drew with Manuka in the last round to grab fourth position.

Ainslie played Manuka in the First Semi-Final at Northbourne Oval. They had a convincing win over Mauka winning by 56 points.

Ainslie played Queanbeyan in the Preliminary Final for the right to play Eastlake in the Grand Final.

Ainslie had another convincing win this time defeating Queanbeyan by 88 points.

The Ainslie team for the Grand Final against Eastlake was:

Ainslie and Eastlake played off in the Grand Final at Manuka Oval on 28 September. Eastlake were coming off a run of 16 consecutive wins and had not been beaten by Ainslie during the season. Ainslie won the 1946 Premiership by defeating Eastlake by 37 points in the Grand Final.

Alan ‘Ginty’ Stevens won the 1946 Mulrooney Medal. Stevens had returned to Ainslie in 1946 after playing with the Eastlake-Manuka combine side during the war years. He also saw active service in the war.

After defeating Queanbeyan in the Semi-Final Ainslie Intermediate team made it through to the Preliminary Final but they were defeated by Eastlake, 4.3-27 to 2.4-16.

The Ainslie Intermediate Team that played in the Preliminary Final was: 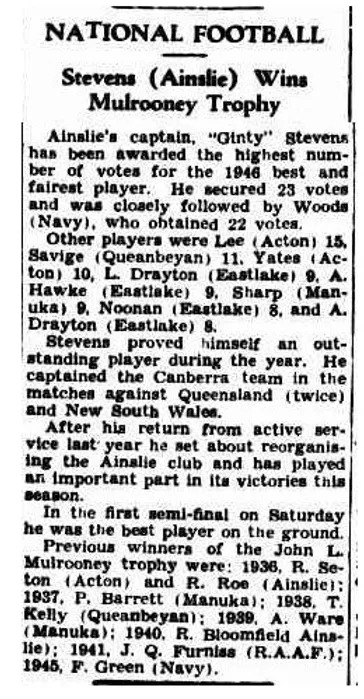 Ainslie also won Premierships in the Junior and Sub-Junior Grades.

The Ainslie Junior team for the Grand Final was:

The Ainslie Sub Junior Team for the Grand Final was:

Alan Ray tied for the League Best & Fairest in the Junior Grade.

Lionel James tied for the League Best & Fairest in the Sub-Junior Grade.