Former VFL player with Collingwood and Richmond, Rod Oborne, was appointed as Ainslie’s Captain/Coach for the 1984 season.

Ainslie First Grade played Queanbeyan in the Second Semi-Final at Football Park, Phillip in a fiercely contested game. After Queanbeyan led by 4 points at three quarter time the lead changed several times before Ainslie ran out winners by 9 points.

For the third successive year Ainslie and Eastlake met in the Grand Final. Eastlake started the game strongly but Ainslie hit back to lead at half time by 11 points. From there Ainslie kicked 12 goals to 6 to win the game comfortably by 49 points and win three Grand Finals in a row and their fourteeth Premiership.

The Ainslie Grand Final Team was:

Greg Stewart was runner-up in the Mulrooney Medal behind Geoff Hocking of Belconnen.

Paul Angelis was the leading goal kicker in the League with 139 goals. Paul kicked 29 goals in one match against West Canberra which was a record for a major league game. Ainslie also set a record in this game for the most goals kicked in a game in the ACT League of 53.15-333 .

Ainslie won the Club Championship for the Best Performed Club. 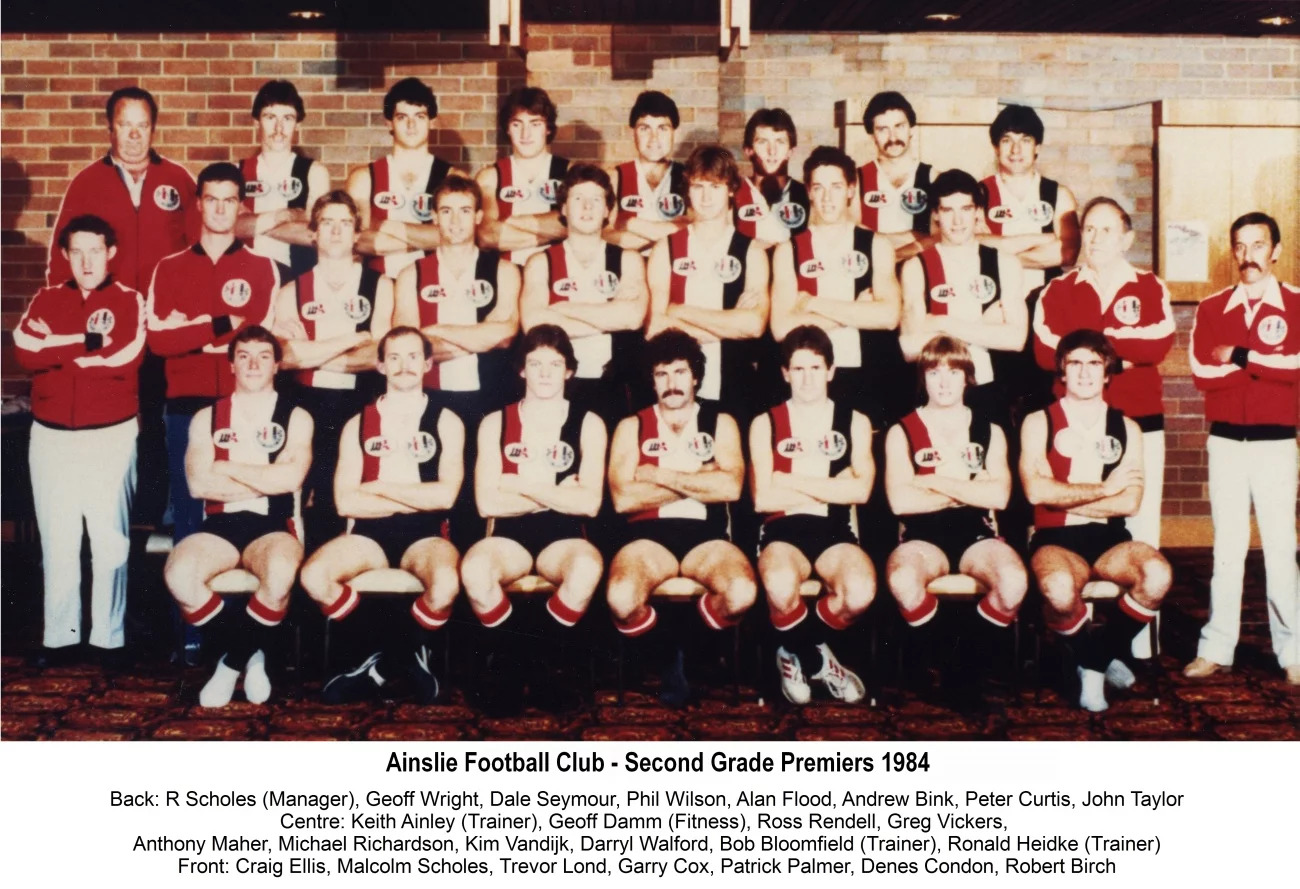 Ainslie finished the home and away games on top of the ladder with 16 wins and 2 losses.

Ainslie played Manuka again in the Grand Final defeating them by 55 points.

This was the Fourteenth Premiership for the Ainslie Second Grade having won 13 from 17 appearances in the Grand Final in the last 18 years. 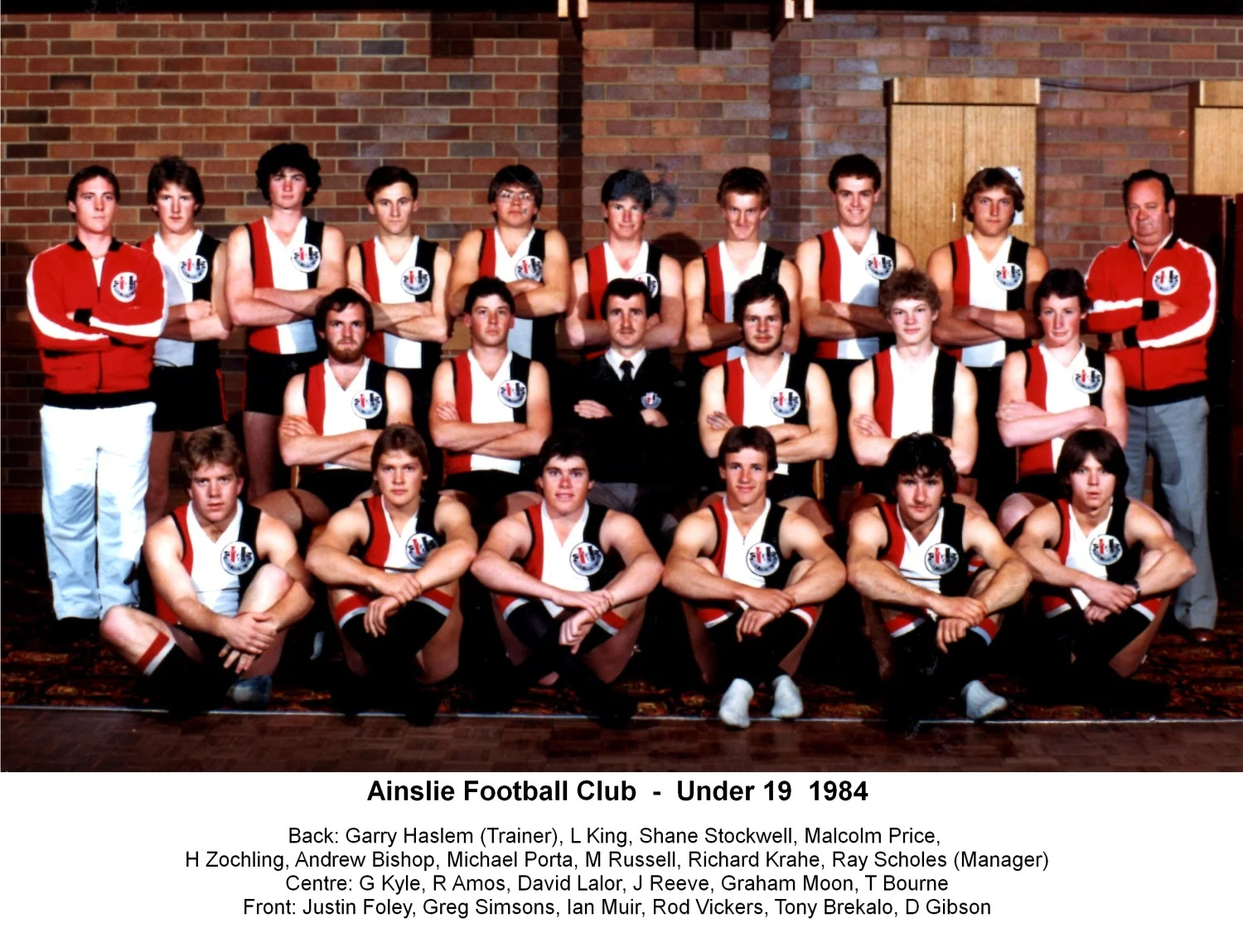 The Ainslie Under 19s finished third after the home and away games with 12 wins and 6 losses.

Ainslie Under 19s were defeated in the Preliminary Final by Manuka to finish in third place. 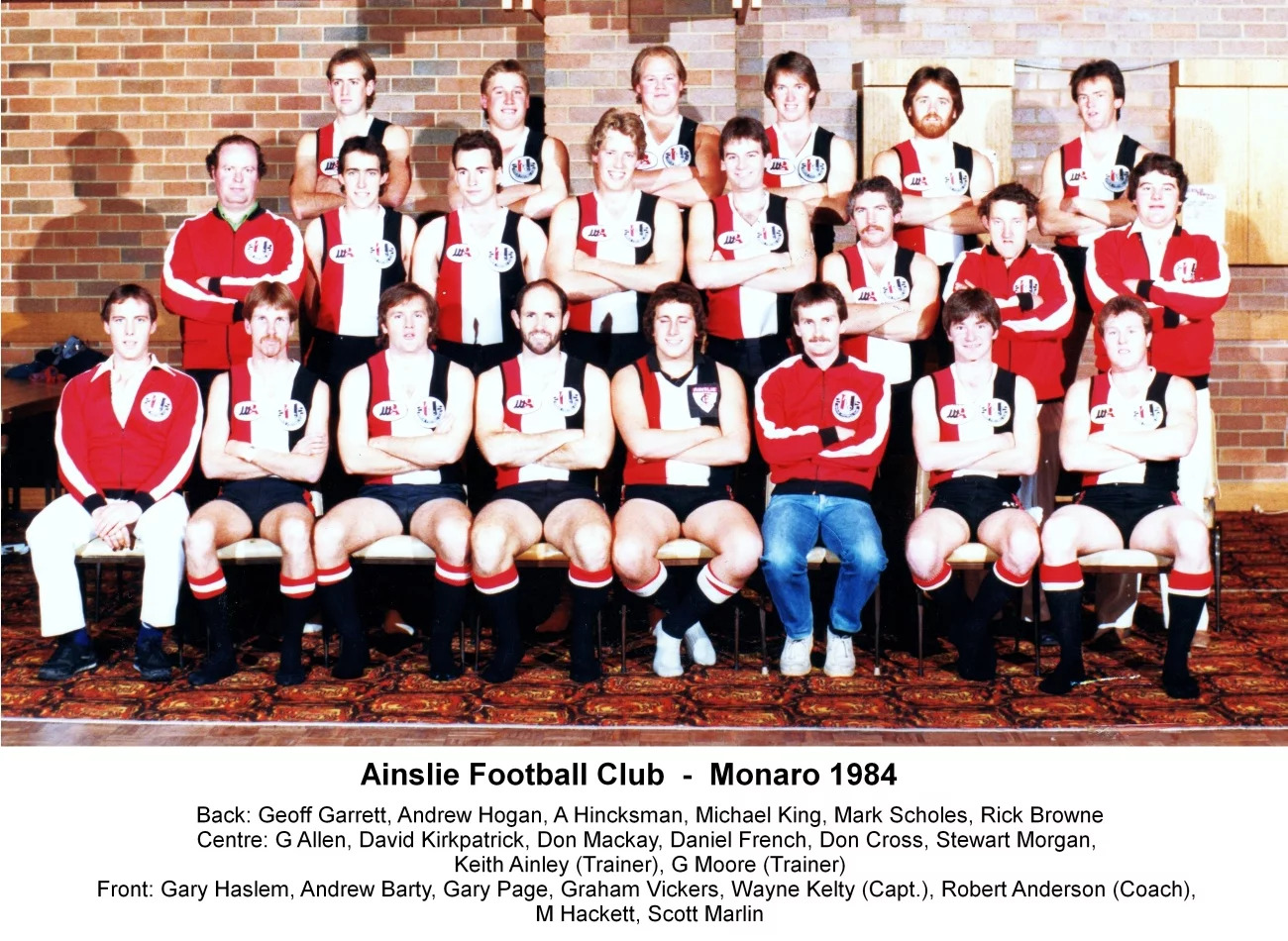 The Ainslie Monaro Team finished the season in fourth place of the Divsion 2A of the Monaro League after being defeated by RMC in the First Semi-Final. 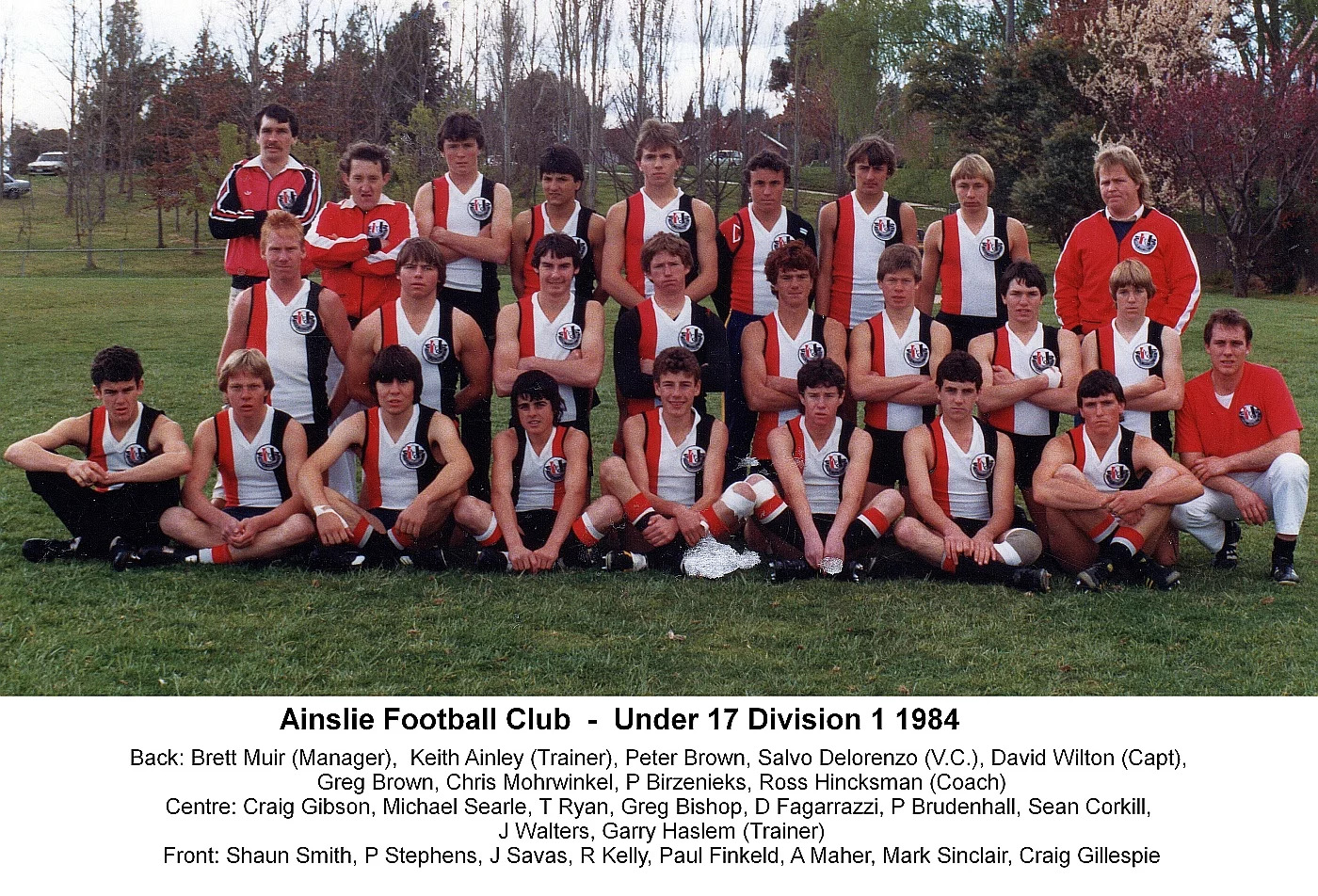 Ainslie had an Under 17 Team in both Divisions of the Grade.

The Ainslie Under 17 Division 1 team defeated Marist in the First Semi-Final.

They made it through to the Grand Final by defeating St Edmunds in a close encounter in the Preliminary Final.

Ainslie were defeated by Belconnen South in the Grand Final to finish as Runners-up.

The Ainslie Under 17 Div 1 team for the Grand Final was: 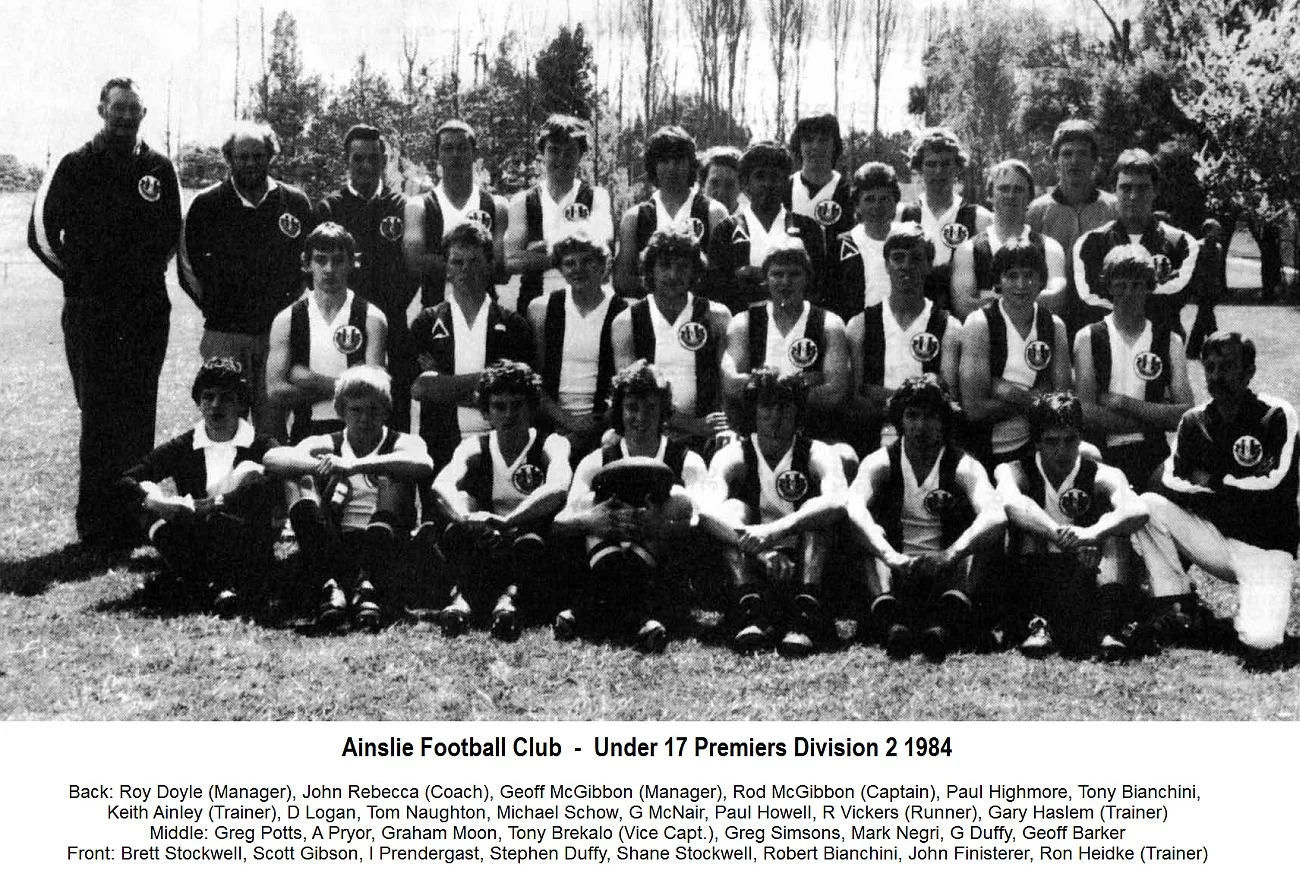 The Ainslie Under 17 Division 2 team lost the Second Semi-Final to Woden-Manuka.

The Grand Final team for the Division 2s was:

Greg Simsons kicked 93 goals to lead the Grade in goal kicking. He also kicked 12 playing in other grades to take his tally to 105 goals.