Ainslie Football Club withdrew from the NEAFL competition and returned to the Canberra Community competition. This left Eastlake as the only remaining ACT NEAFL team and they changed their named to the Canberra Demons. Ainslie had teams in all possible Grades, being the only Club to do so, supporting six teams. The AFL Canberra First Grade competition consisted of six Clubs, Ainslie, Belconnen, Eastlake, Gungahlin, Queanbeyan and Tuggeranong.

At the end of the home and away games Ainslie First Grade finished on top of the ladder with 14 wins and 1 loss.

Ainslie played Belconnen in the Semi-Final at Ainslie Oval. Ainslie jumped Belconnen to score 6 goals to nil in the first quarter and continued on to have 10 goals to 1 at half time. Ainslie increased their lead in each quarter to run out winners by 91 points and go through to the Grand Final.

In the Grand Final Ainslie played Queanbeyan after their 2 point win over Belconnen in the Preliminary Final. Ainslie opened up a good lead of 19 points at quarter time thanks to an explosive quarter by Nick Paine kicking 5 goals. The lead was extended to 31 at half time. Queanbeyan closed the game down in the second half making scoring difficult but Ainslie ran out winners by 29 points to win their 25th Premiership.

Nick Paine was awarded the Alex Jesaulenko Medal for Best Player on the Ground.

Simon Curtis and Aaron Wiles polled 12 votes to be equal third in the Mulrooney Medal. 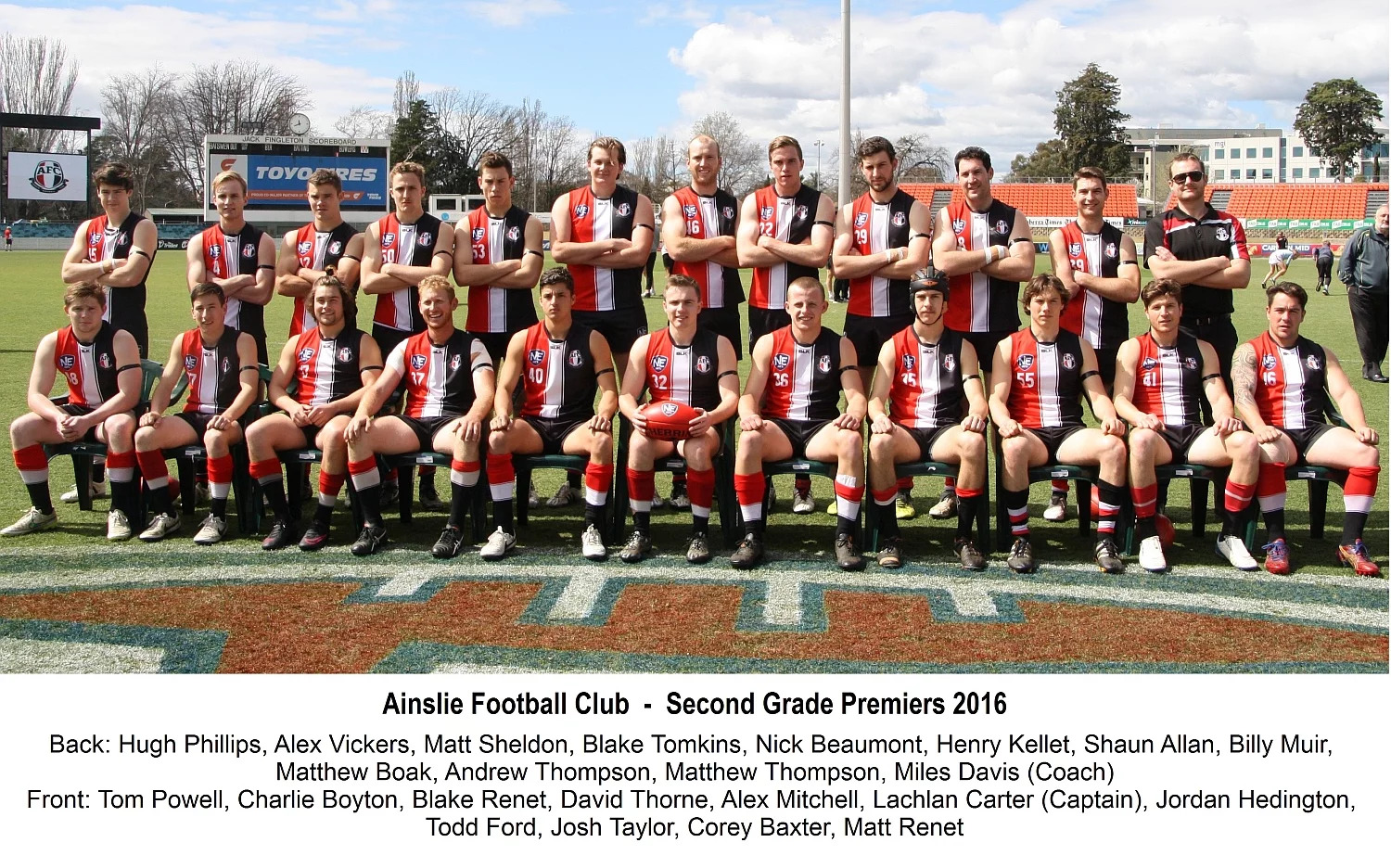 At the end of the home and away games the Ainslie Second Grade were undefeated on top of the ladder with 14 wins.

Ainslie defeated Belconnen in the Semi-Final with an easy win by 88 points.

Ainslie met a much stronger Belconnen team in the Grand Final. Ainslie struggled to get their game going and after trailing at quarter time fought back to lead by 8 at three quarter time. In a tight struggle in the last quarter Ainslie were able to win by 19 points to win the Club’s 24th Second Grade Premiership. 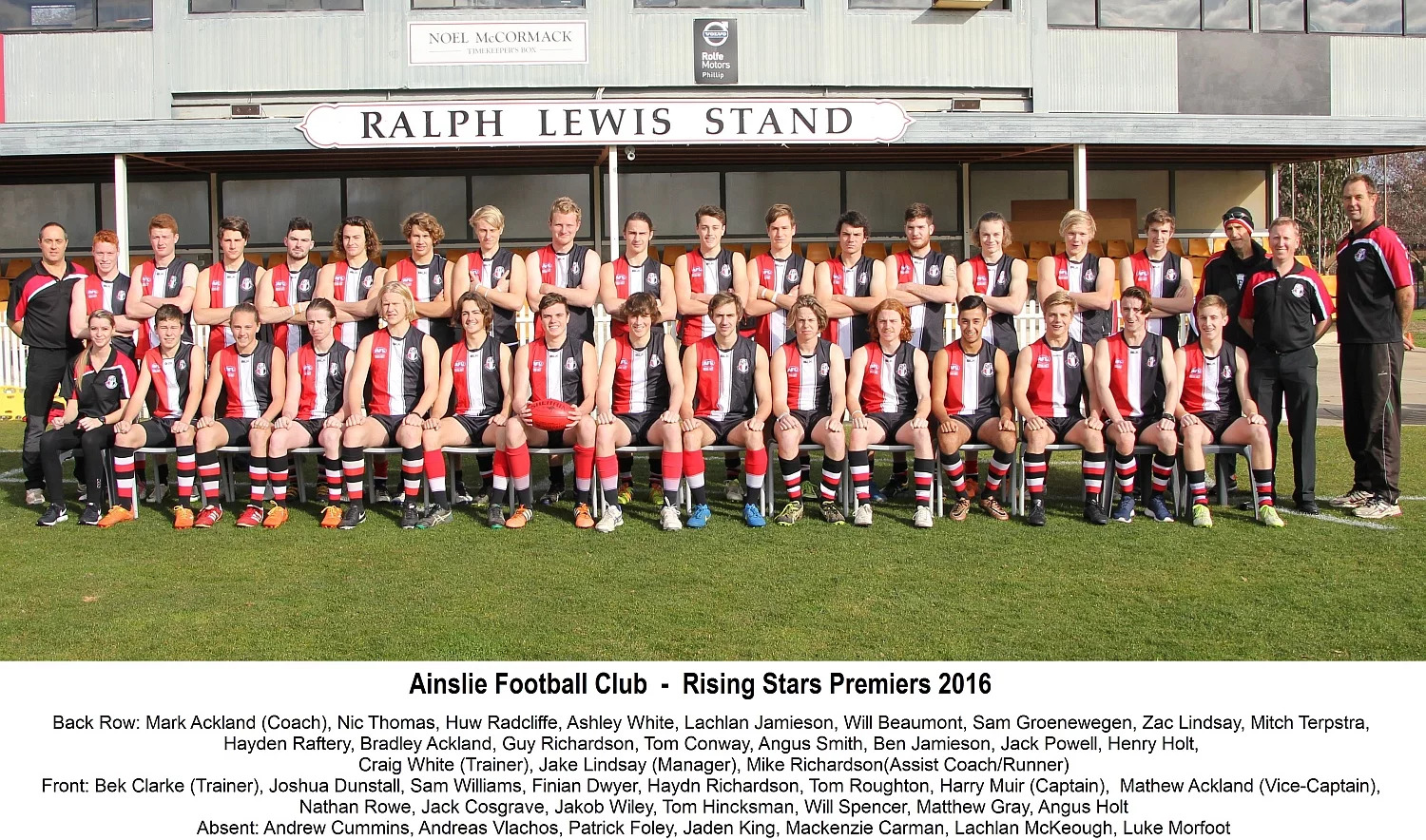 The Ainslie Rising Stars went through the home and away season undefeated with 14 wins.

Ainslie played Queanbeyan in the Semi Final in a very tight match. Ainslie trailed for the first time during the season at three quarter time by 2 goals. They rallied in the last quarter kicking 4 goals to 1 to win by 5 points.

Ainslie played Queanbeyan again in the Grand Final. This time Ainslie held control of the game and led by 38 points at three quarter time before a late comeback by Queanbeyan reduced the margin to 20 points at the final siren. 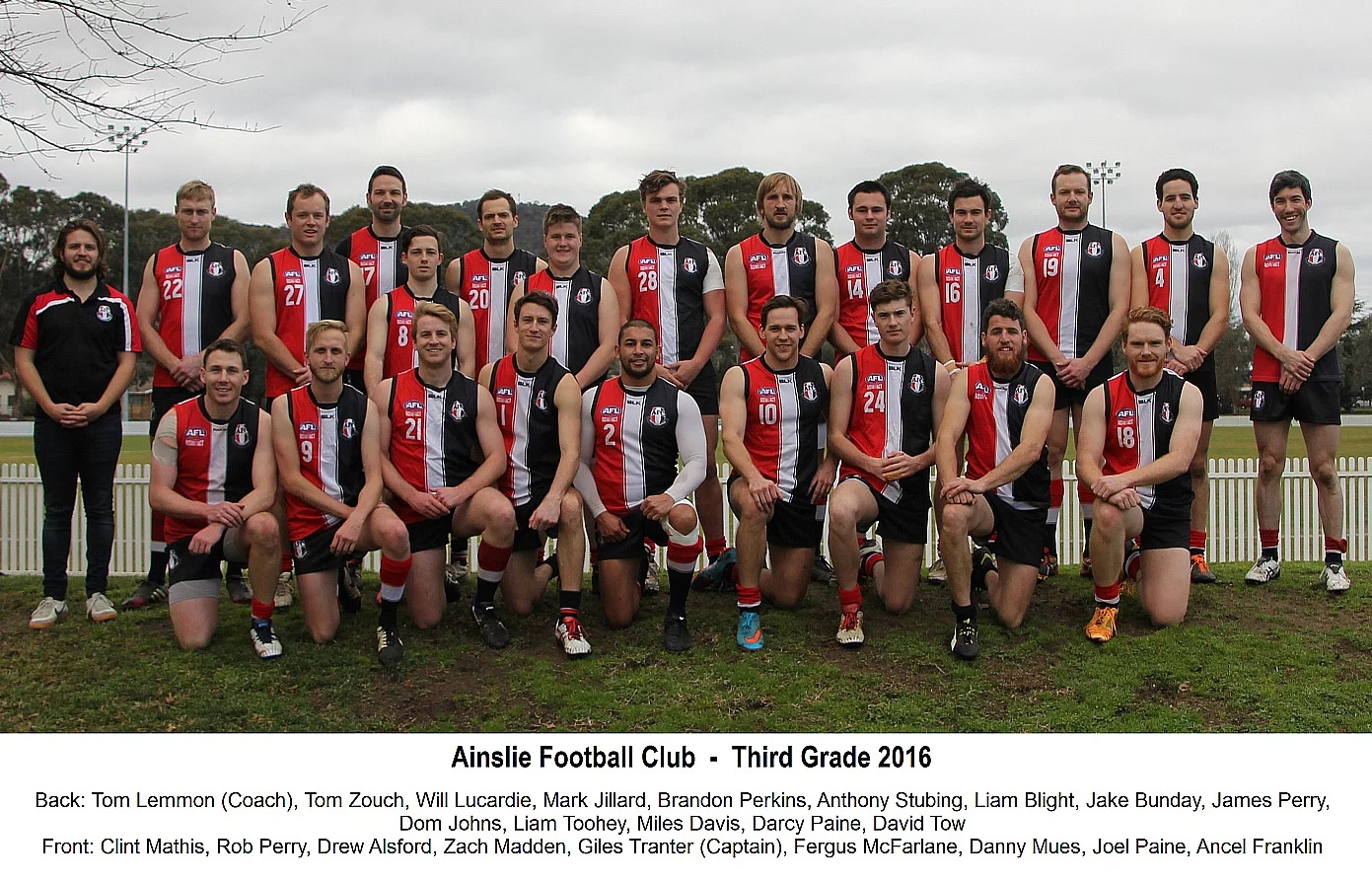 Ainslie Third Grade finished in Third place after the home and away games with 10 wins and 4 losses.

Ainslie played sixth placed team Batemans Bay in an Elimination Final. After a tight first quarter Ainslie led by a point but then opened up a good lead of 31 points at half time before running out winners by 26 points.

In the Preliminary Final Ainslie came up against a tall, skilful team in ANU. The First half was hard fought and only 3 points separated the teams at half time. ANU turned on the pressure after half time to kick 6 goals to Ainslie’s 3 leaving Ainslie in Third place.. 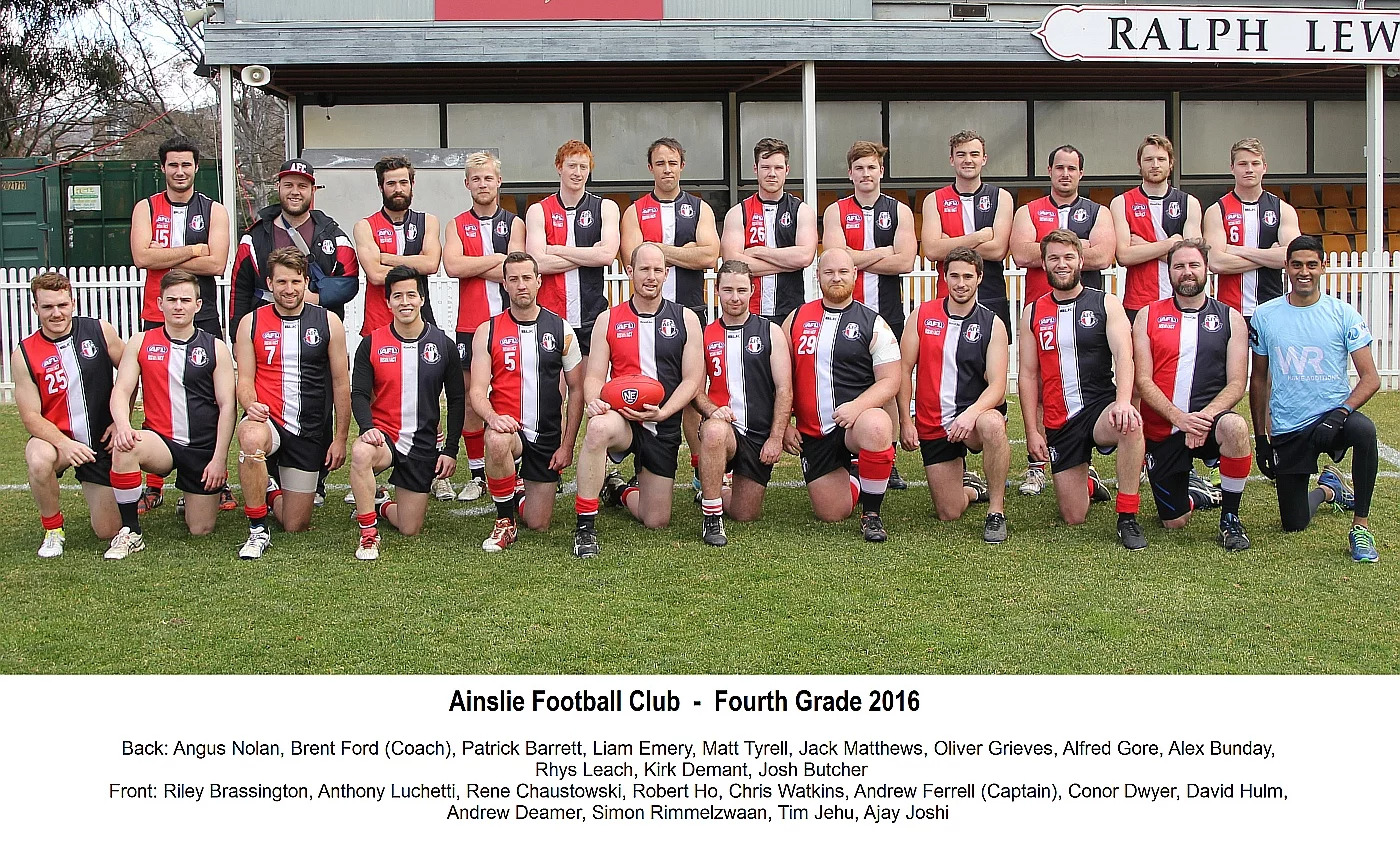 Ainslie Fourth Grade finished the home and away season in second position with 14 wins and 2 losses.

Ainslie had the first week off in the Finals and met ANU in the Preliminary Final. ANU controlled the game and Ainslie couldn’t close the gap set up in the second quarter to lose by 14 points. 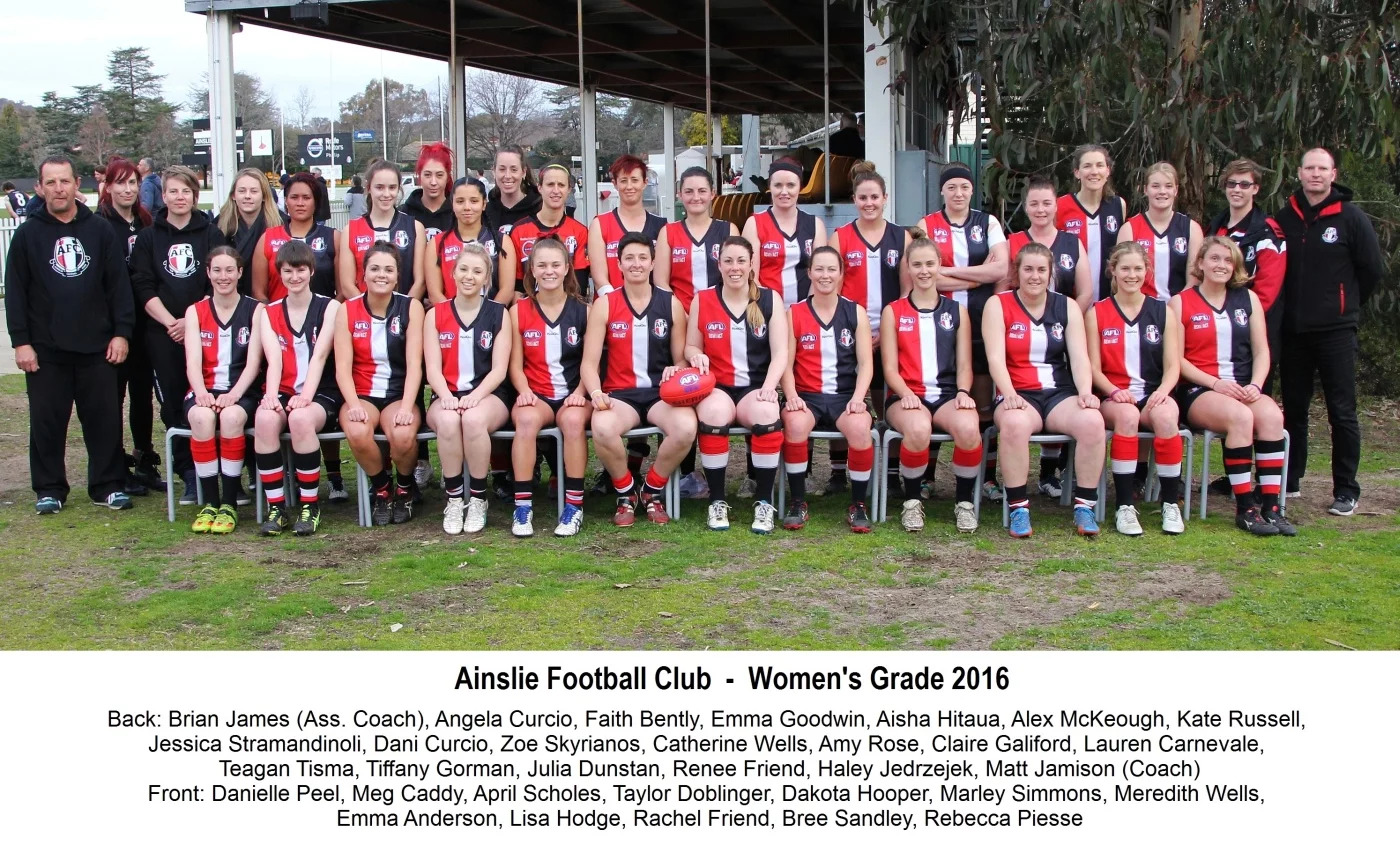 The Ainslie Women’s team finished in eight place after the home and away with 4 wins and 9 losses. They played in the Division 2 Finals.

They played in the Div 2 Semi-Final against Molonglo but were defeated by 37 points.