Ainslie again had teams in all possible Grades, being the only Club to do so, supporting six teams. The AFL Canberra First Grade, Second Grade and Rising Stars competitions consisted of six Clubs, Ainslie, Belconnen, Eastlake, Gungahlin, Queanbeyan and Tuggeranong.

At the end of the home and away games Ainslie First Grade finished in second position on the ladder with 11 wins and 4 losses. Belconnen finished in top place with 13 wins.

Ainslie played Belconnen in the Semi Final at Kippax Oval. It was a tough, physical game and Ainslie led at quarter time by 2 points but Belconnen turned up the heat in the second quarter kicking 5 goals to 1. Ainslie fought back in the third quarter to reduce the margin back to 8 points. Belconnen finished the game the strongest kicking 4 goals to 1 in the final quarter to win by 24 points.

Ainslie then had to play Eastlake in the Preliminary Final after they defeated Queanbeyan in the Semi Final. The game was played in atrocious conditions at Gungahlin Enclosed Oval with very cold wind, rain and snow. It was a comfortable win for Ainslie as they increased their lead in each quarter before winning by 76 points.

Ainslie met Belconnen again in the Grand Final at Manuka Oval. Belconnen had won 3 of the 4 games between the two teams during the season so began as favourites. Led by Nick Paine Ainslie set up an early lead of 3 goals at quarter time. The margin was similar at 3 quarter time before Ainslie came home strongly in the final quarter kicking 5 goals to 2 to win the Grand Final and their 26th Premiership by 42 points. This was coach Chris Rourke’s 4th Premiership in his 11th year at the Club. 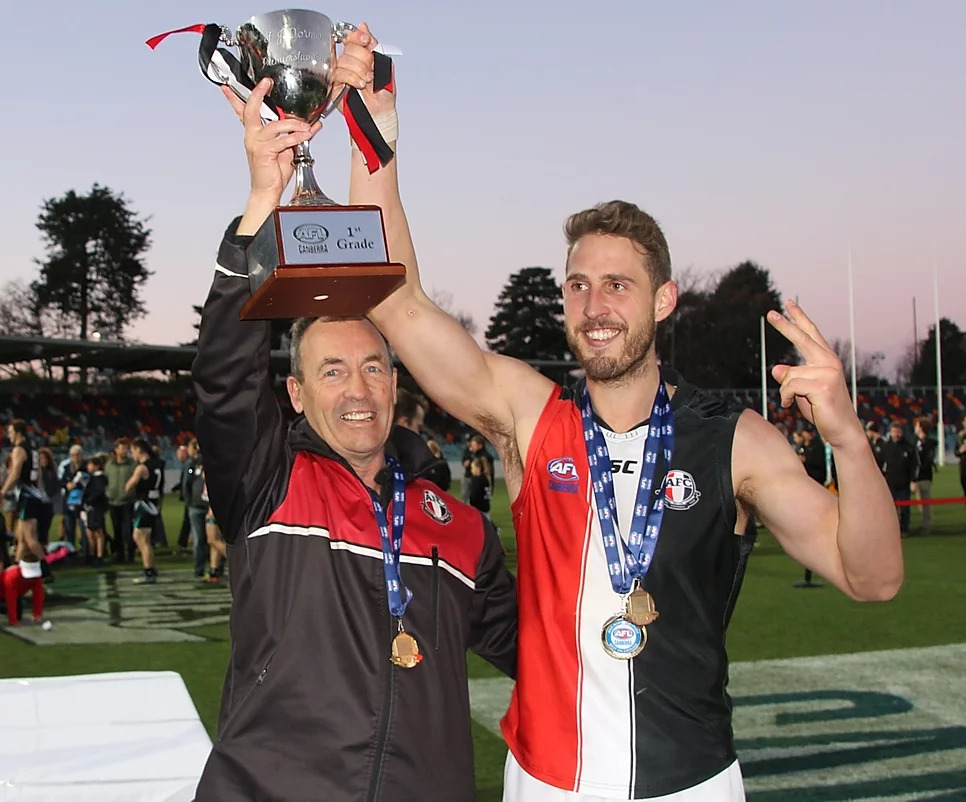 Captain Simon Curtis was awarded the Alex Jesaulenko Medal for Best Player on the Ground.

Simon Curtis polled 15 votes to be runner-up in the Mulrooney Medal.

Henry Delves was Ainslie’s leading goalkicker with 47 goals followed by Nick Paine with 45. 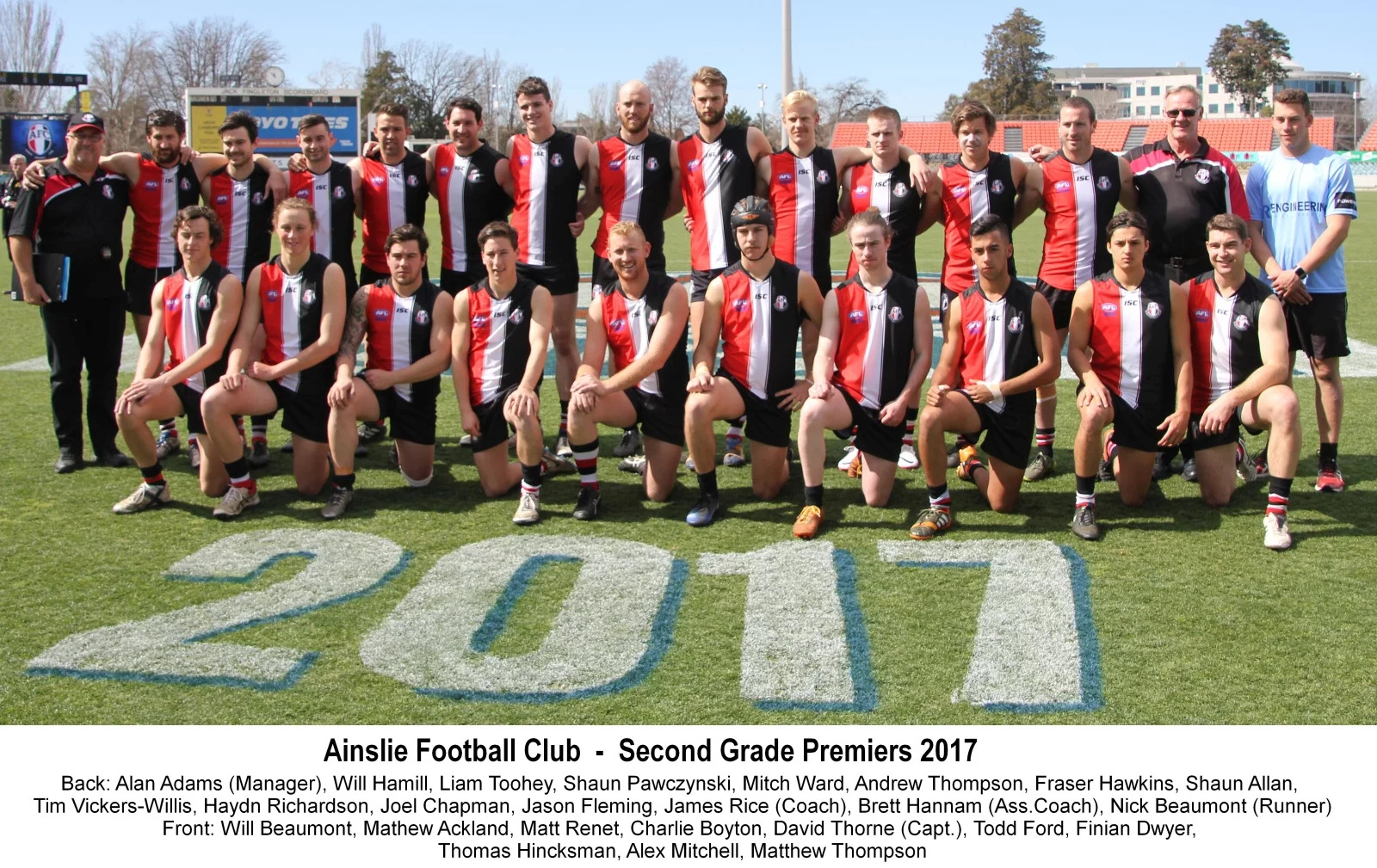 At the end of the home and away season Ainslie Second Grade were undefeated on top of the ladder with 15 wins.

Ainslie played second placed team Queanbeyan at Kippax Oval in the Second Semi Final. Ainslie won comfortably by 66 points to go through to the Grand Final.

James Rice was awarded the Best on Ground Award.

Charlie Boyton and Andrew Thompson tied for the League’s Best and Fairest Award in the Second Grade with 8 votes each. 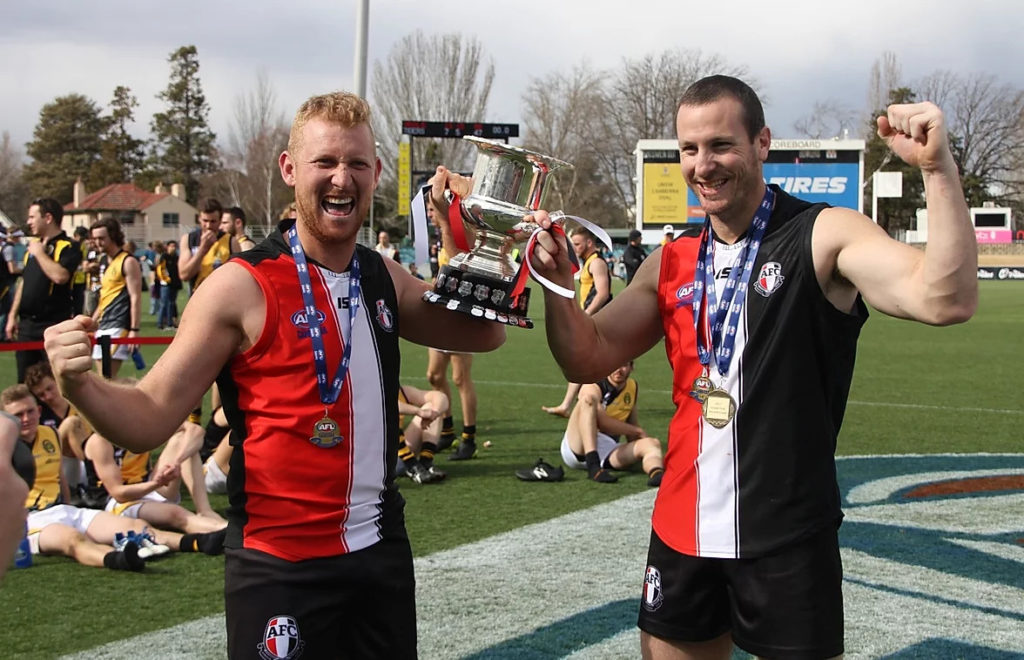 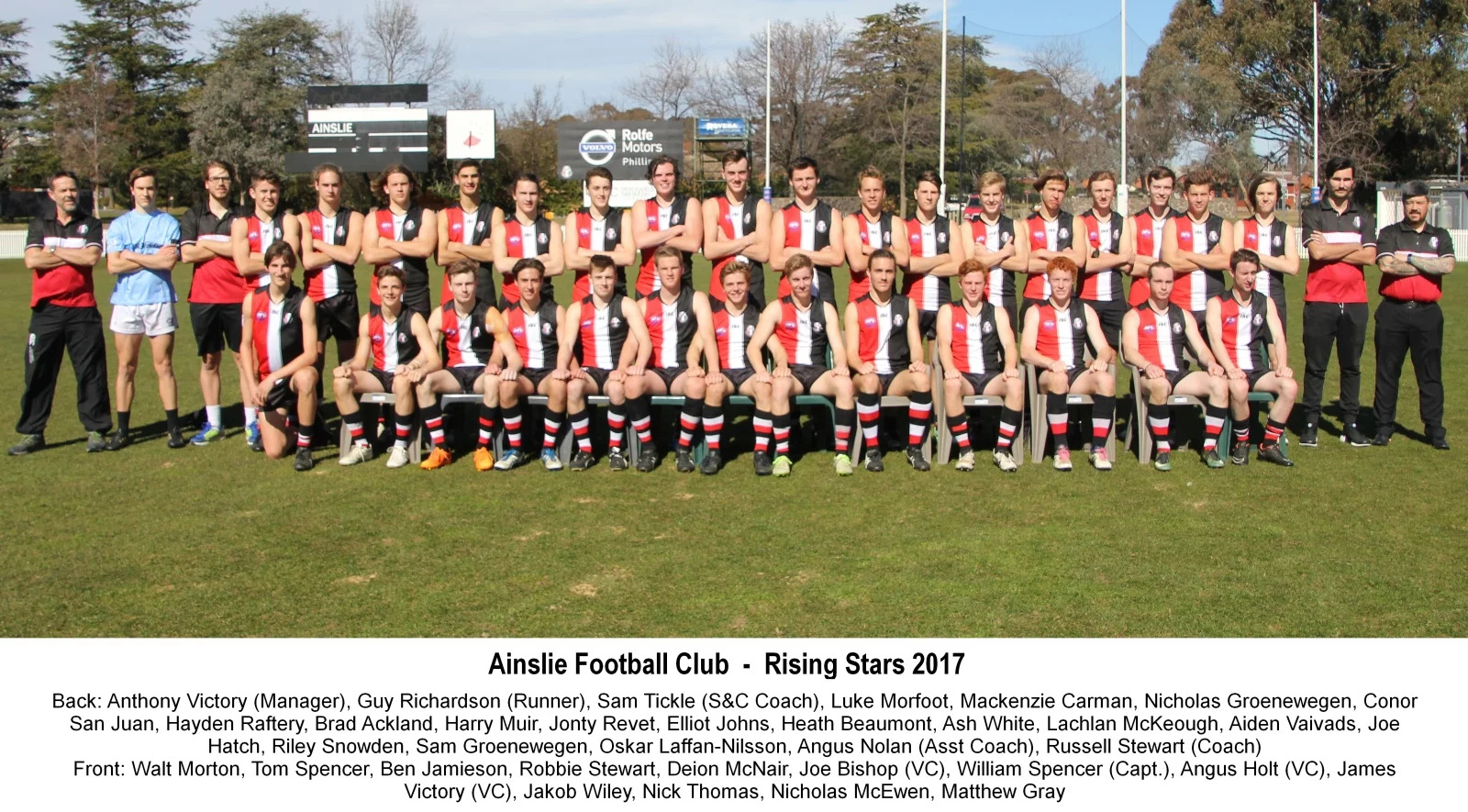 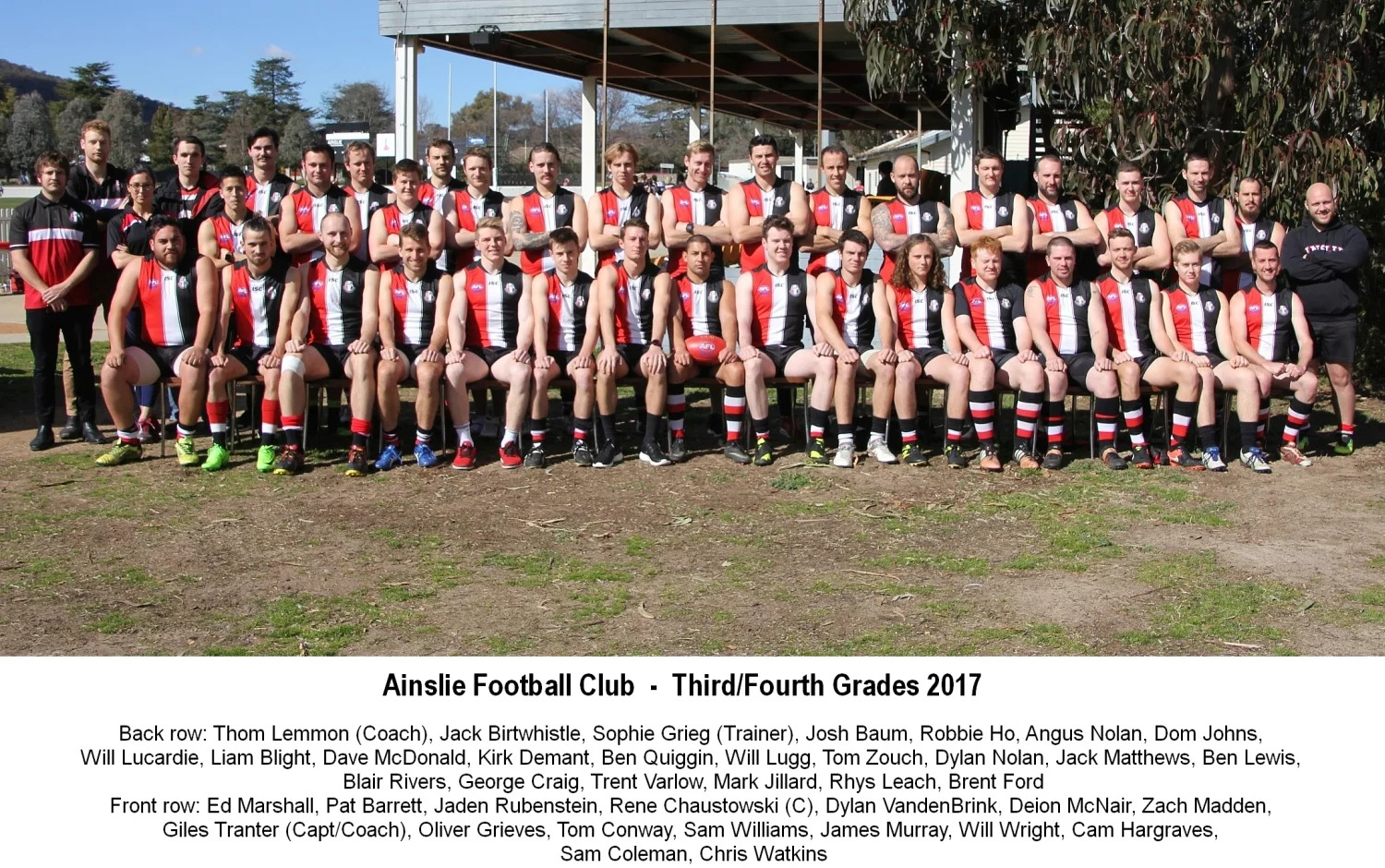 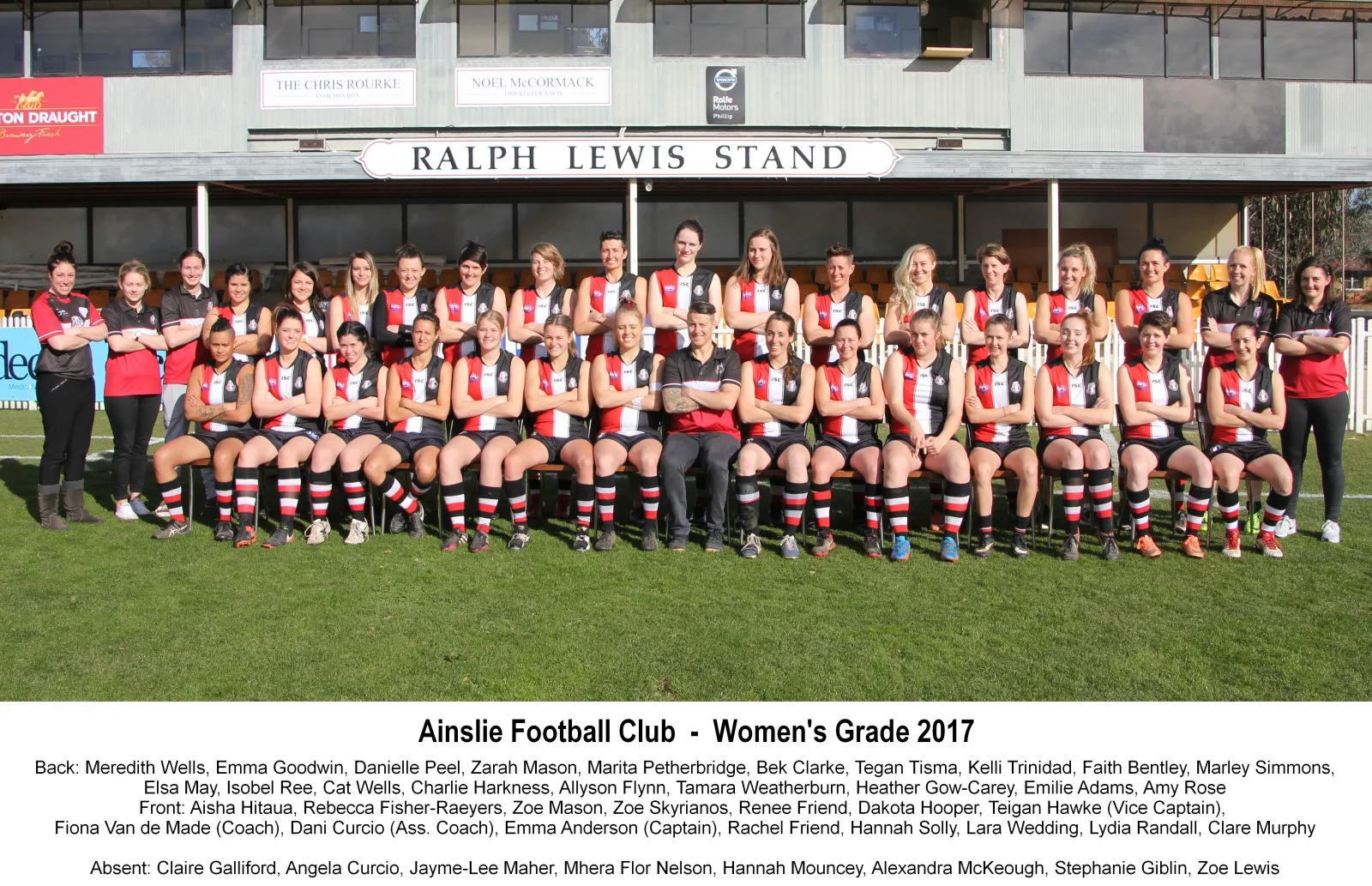